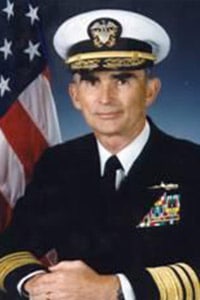 Vice Admiral Amerault embarked on his naval career on 29 June 1965.   After having his commissioning as an Ensign at the United States Naval Academy, he served at sea as Gunnery Officer and First Lieutenant on board USS Massey DD 778. He then served as Officer-in-Charge, Patrol Craft Fast 52 (Swift Boat), he conducted more than 90 combat patrols in hostile waters off the coast of Vietnam.   One example of his valor and heroism is quoted from Commander Coastal Division Fourteen on 21 December 1967, “On the night of 4 August 1967 the patrol craft in the area adjacent to the one you were patrolling came under enemy fire.   Disregarding your own safety, you directed your patrol craft to within 300 yards of the beach and bombarded the enemy position with intense .50 caliber and 81mm mortar fire.   During this exchange your patrol craft was narrowly missed by a barrage of recoilless rifle fire.”   He was awarded a Bronze Star Medal with Combat V and the Combat Action Ribbon for his service.

Vice Admiral Amerault’s follow-on sea tour was on the USS Taylor DD 468, as Engineering Officer. During this tour he earned a coveted Shellback certificate for crossing the equator. He then reported on board USS Benner DD 801 as Chief Engineer.

Several more sea tours followed in steady progression. He was Executive Officer on the USS Dupont DD 941. He then was the Executive Officer on USS Sierra AD 18. He served as the commissioning Commanding Officer of USS Nicholas FFG 47 and Commanding Officer of USS Samuel Gompers AD 37.   He then served as Staff Combat Information Center Officer for Commander Cruiser Destroyer Group TWO; and commanded Destroyer Squadron SIX, then Amphibious Group FOUR and the Western Hemisphere Group.

A scholar as well, VADM Amerault is a graduate of the Naval Postgraduate School, receiving a Master of Science degree in Operational Research and at the University of Utah he was granted a Master of Arts degree in Middle East Affairs and Arabic, he was also the US Navy’s 1986-87 Federal Executive Fellow at the RAND Corporation, of Santa Monica, California.

Vice Admiral Amerault also held the distinction of being the US Navy’s “Old Salt” – the active duty officer who has been qualified as an officer of the deck underway the longest.

After his retirement, Amerault has served as President of Thirteenth Street Consultants, an Executive Vice President and Chief Operating Officer at MELE Associates, Inc., and also Senior Vice President and Director of Business Development at Alion Science and Technology, Inc.   He now serves as Chief Executive Officer at Oto Melara North America Inc.

Vice Admiral Amerault is married to the former Cathryn C. xxxx of . They reside in Atlantic Beach, Florida.