Memorial also will honor military personnel and their families who lived and worked at the base. 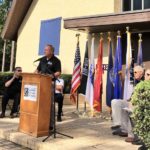 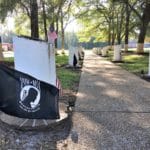 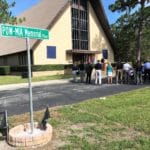 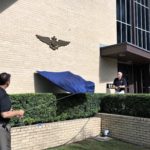 A chapel renovation and road dedication launched a $30 million commitment for a national POW-MIA Memorial at the former Cecil Field Naval Air Station on Jacksonville’s Westside.

About 200 people attended the ceremony Tuesday at the Chapel of the High-Speed Pass and at the POW-MIA Memorial Parkway, formerly known as New World Avenue.

The chapel and parkway are the first pieces of a larger plan for a national memorial and historic destination for former prisoners of war and those still m­­­­­issing in action.

The memorial also will honor thousands of military personnel and their families who lived and worked at Cecil Field Naval Air Station before its deactivation in 1999.­

Albert “Buddy” Harris, a retired Navy commander, ­told the audience that it was shameful the nation lacked a national memorial for POWs and MIAs.

He spoke about the emotional weight military families carry, sometimes for decades, when they had no place, opportunity or remains to properly memorialize a loved one and to tell their story.

In 2009, Harris was instrumental in bringing home the remains of his friend, Navy Lt. Cmdr. Michael Scott Speicher, whose F/A-18 Hornet was shot down over Iraq during the first Gulf War.

The Cecil Field POW-MIA Memorial will be the place to honor soldiers and pilots like Speicher.

“We’re here to correct all that,” Harris said. “These are special individuals and true heroes. At least they will have a place to go and to be recognized.”

The plans also call for a POW-MIA Memorial Center and Museum with exhibits, videos, artifacts and memorabilia on POW and MIA issues, the NAS Cecil Field Memorial and a park.

The project will cost about $30 million and is expected to take five to six years, said Michael Cassata, executive director of the Cecil Field POW-MIA Memorial, a nonprofit that’s overseeing the memorial project.

Most of the funding will come from private donations, Cassata said.

The chapel renovation begins with new carpet, air conditioning and pews. Originally dedicated in 1963, the chapel served NAS Cecil Field. After de-activation, it was turned into a storage facility.

“There was a circle of life going on out there all the time,” said Mike “Carlos” Johnson, a retired rear admiral who spoke Tuesday. “This building, it’s great to bring it back to life.”

The Chapel of the High-Speed Pass is named after a song written by a pilot, one of many who used the runway at Cecil Field to practice aircraft carrier landings.

The military chapel will be used to memorialize those lost in the line of duty who were stationed at NAS Cecil Field, former prisoners of war and the more than 82,000 servicemen and women still considered missing in action.

It also will be used for weddings, memorial services, retirements and other services.

After de-activation, the base was redeveloped as the Cecil Commerce Center, an industrial and commerce center that is now home to advanced manufacturing, aviation and aerospace, distribution and logi­stics operations, including FedEx and Saft.