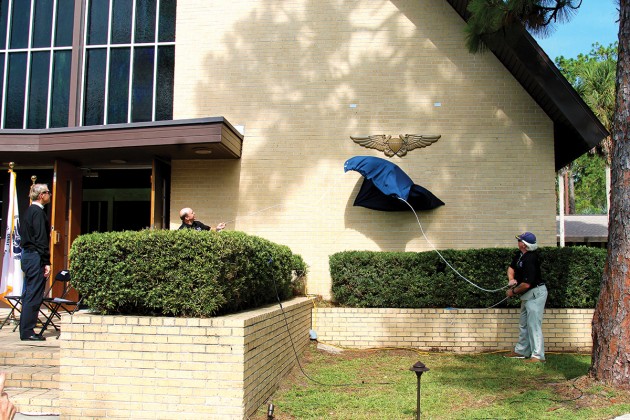 The unveiling of the Naval Flight Officer Wings, funded by the Viking Association

More than 200 members of the community, including many veterans and current servicemembers, gathered on a sweltering morning July 10 to dedicate the POW-MIA Memorial Parkway, formerly known as New World Avenue, and to celebrate the unveiling of two sets of aviator wings on the front wall of the Chapel of the High-Speed Pass.

A bill introduced by Councilman Doyle Carter (District 12) and co-sponsored by Councilman Jim Love (District 14) was passed in May by the Jacksonville City Council to rename the six-mile road leading to Cecil Field, effective July 1.

Love and his executive administrator, Kevin Kuzel, attended the ceremony, which was poignant to both men, who flew A7 Corsairs out of Cecil Field. Additionally, Kuzel’s father, Frank, will be commemorated at the memorial when the names of more than 82,000 missing and unaccounted for servicemembers will eventually be on display. As a member of the 101st Airborne glider troops, Frank Kuzel was captured and held as a POW by the Nazis for about six months during World War II. 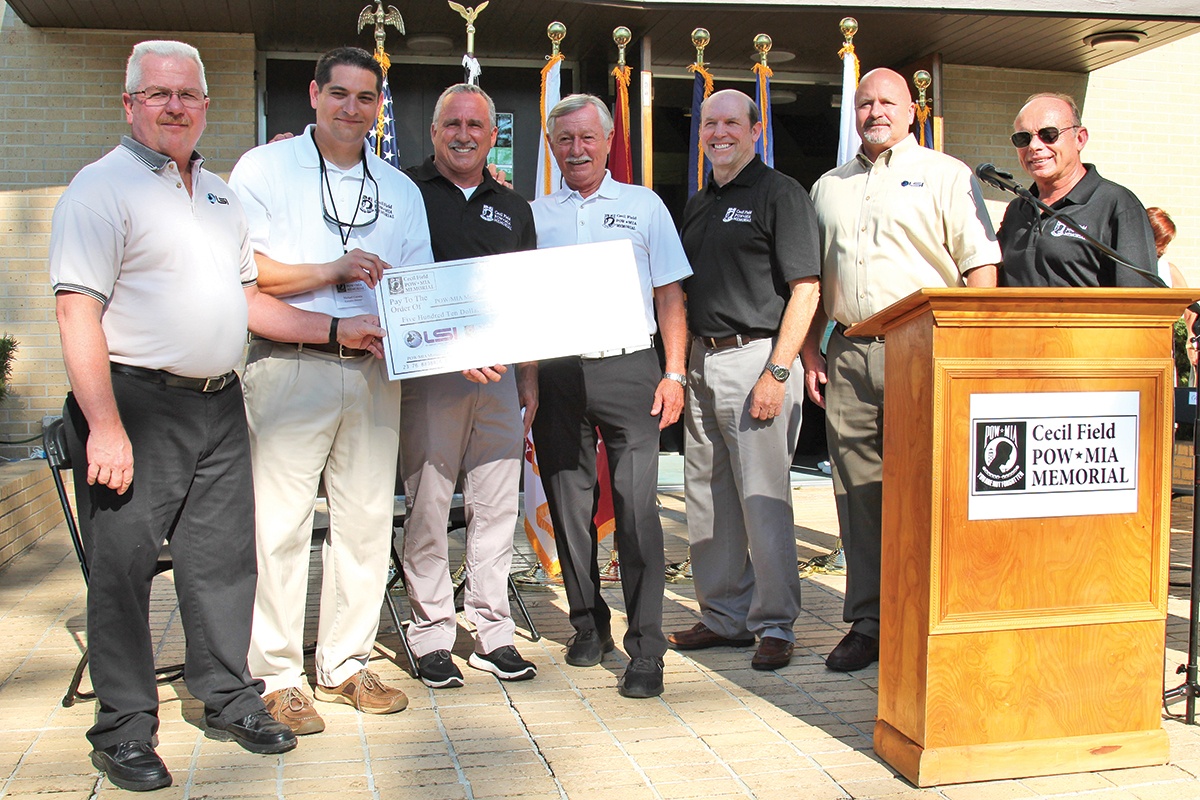 Retired U.S. Navy Captain Sam “Shoebags” Houston, former base commander 1992-1994 and board chair for the Cecil Field POW/MIA Memorial, welcomed the attendees. Following the unveiling of the new street sign in front of the chapel, remarks were made by Retired U.S. Navy Commander Albert “Buddy” Harris, who described the formerly inadequate process undertaken by the federal government to locate and retrieve prisoners of war or missing in action.

Within two years of changing the process and getting the Missing Persons Act of 1996 passed, they brought back more missing people than had been brought back in 15 years, Harris said.

The second half of the program focused on two sets of wings constructed by 3D Forge Printing Studio and affixed to the chapel’s exterior. After the wings were unveiled, remarks were made by Retired U.S. Navy Rear Admiral Mike “Carlos” Johnson, who represented the A-7 Corsair II Association, which funded the Aviator Wings, and by Retired U.S. Navy Captain Edmund “Junior” Turner, who represented the Viking Association, which funded the Naval Flight Officer Wings.

The Cecil Field POW-MIA Memorial was dedicated in 1973 by the families of POW-MIA pilots and servicemembers to ensure the soldiers are not forgotten.

The site currently consists of Heroes Walk and Freedom Trees, markers and associated planted trees for each of the 16 Naval Aviators stationed at NAS Cecil Field during the Vietnam and Desert Storm War eras, a pavilion with a stage area, a starburst metal display of aircraft, and a granite base seal of a former Master Jet Base.

In 2017, the nonprofit revealed an ambitious $30 million, multi-phase plan to create a memorial center and museum to serve as a historic destination site with exhibits, special events and activities, artifacts and memorabilia.